The literal meaning is Nine: Nine Times Time Travel, but I will refer to it as Nine or Nine: Nine Time Travels which makes more sense. This is just a quick thought on how this drama is going so far. Only 8 episodes have been out, with 12 left to go, this drama is pretty intense. So intense that episode nine’s preview hints at the main character, Park Sun Woo, kicking the bucket. Is this suppose to be symbolic, the main guy dies in episode nine in a show called Nine: Nine Times Time Travel? Well whatever it’s suppose to be, I know some divine power will be intervening because our main guy cannot die.

My main issue with Park Sun Woo is plain and clear: What is this man thinking?? If his thinking isn’t fallacious, then we wouldn’t have a drama, but dude… seriously, you’re a smart guy, what are you doing trying to bring back dead people. One thing is trying to escape death, another is waking up the next day to find your best friend’s brother who died as your boss. Weird stuff. Since I’m on the subject of Han Young Hoon, Sun Woo’s best friend, I would like to express my love for him. I love when the main character has a doctor as a best friend. I also love that Sun Woo told Young Hoon about the time traveling. Finally, I love when Young Hoon goes crazy because he can’t seem to grip the reality that this is actually happening. Young Hoon told Sun Woo that finding these sticks would be more of a curse than a blessing, and unfortunately Sun Woo had to learn that lesson the hard way. He accepted his faults for not listening to his friend, but as a consequence he is now in a very grim situation. 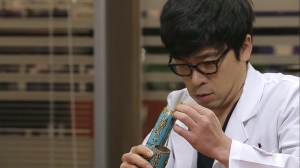 I’m so upset that Sun Woo wasted those sticks trying to bring back his brother and father. I think that’s something you just don’t mess with when you’re given a chance to go back in time. Since this is by the same team who did Queen In Hyun’s Man (one of my favorite dramas), we know that there are dire consequences when you try to bypass death. The preview for episode 9 isn’t consolidating me because it seems our hero is going to “die”. Here’s a scenario I thought of. Sun Woo dies, is buried, everyone is sad and what not. Then at night, theres a pager in his pocket, it starts beeping because the him in 1992 is calling the him in 2012. He magically wakes up, and is whisked somewhere…I haven’t figured out that ending part, but does this sound familiar?

Looking at the idea of fate and giving man the ability to change it, Sun Woo has changed his life so drastically that Joo Min Young has become his niece. It’s safe to say that he is probably regretting not taking her seriously all that time. Similarly in Queen In Hyun’s Man, Choi Hee Jin forgot Kim Boong Do because the tailsman was burned. Nevertheless, their fate to love each no matter what time period they were in was so strong, she was able to remember him in the end. At this point, either the heavens will grant Sun Woo a chance to magically change what happened, or it’s now up to each character to somehow end up in their respective places because of their inherent nature. Min Young even before Sun Woo tampered with her fate was always a nosy person, and she will always be that way because that’s the characteristic she was inherently given despite whatever time period or situation she is in. Knowing this, since Joo Min Young is now Park Min Young, if Sun Woo and Joo Min Young are linked by the fateful red string, they will find their way to each other one way or another.

I’ll refrain from talking about the other characters because this is a “quick thought” on the buttons this drama is really pushing. Lee Jin Wook and Jo Yoon Hee are fulfilling their roles quite nicely, and they have good chemistry. Park Hyung Sik which I have taking a liking to since ZE:A uploaded their Phoenix practice video, is also doing quite well. It’s so sad that I have to hate Jeong Dong Hwan‘s character in Nine, because I loved him so much in You’re the Best Lee Soon Shin. I also loved the first few episodes where they kept replaying Whitney Houston’s “I Will Always Love You” which is also symbolic. I hope you’re enjoying this drama as much as I am, thanks for reading! 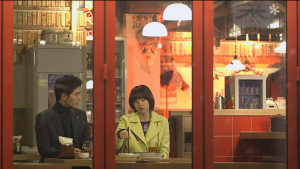 Nine broadcasts every Monday and Tuesday on tvN!

*All credit goes to tvN for the photos.