I think I have become a proud supporter of the PD and writer’s for Queen In Hyun’s Man and Nine. I am going to keep them on my radar because so far their dramas have been outstanding (Which includes Vampire Prosecutor from the PD, and Ten from one of the writers). Ladies and gentlemen, this is how you execute a drama correctly. The plot of Nine: Nine Time Travels is very solid, you can tell they thought this out well and ultimately, we were left with a satisfying ending. I love that after I watched the finale, I had to sit down and really think about what just happened, which rarely happens with the dramas I watch these days.

Sun Woo of 1992 vs. Sun Woo of 2013
I think the ending is going to be a hot debate among people, in the end it’s your choice to believe what you want to believe, but here’s my theory. So it is a fact that the Sun Woo of 2013 died. The question is, how does the Sun Woo of 1992 remember to go find his brother in the mountain when the Sun Woo of 2013 never told him about that? Well, when did Sun Woo’s fate with the sticks start? Did it start when he finally got his hands on them? Or did it start the very moment he met his brother in the cafe to talk with him for one last time before his death. I think his fate began as soon as his brother decided to go look for those sticks. If we keep that in mind, then the time period where the memory of Sun Woo 1992 meets up with the memory of Sun Woo 2013 will merge. You’re probably wondering, “But the Sun Woo of 2013 is dead! Doesn’t the memory disappear with him?” Not exactly, because the moment the two memories merge, it is not 2013 yet, it is 2012. Once the past Sun Woo finally catches up to the point where Sun Woo 2013 died, then he will now live his life without knowing what is going to happen in the future. It is very convoluted, but from watching Queen In Hyun’s Man, I have learned to accept these highly improbable circumstances. Yes, this would never happen in real life, but then if you take into account the number of rom-com drama plot lines that revolve around “normal people”, that probably won’t be happening to the average person either. The simple lesson learned here is that fate is a very complex thing. It is not a binary system, there is no black and white. There are shades of gray everywhere, and those shades of gray include the fates of other people. So if you come across some type of time machine in the near future, trying to change the fate of your life or the fate of someone else’s life will in turn screw up many people around you. Everyone is intertwined some way or another.

Park Sun Woo and Joo Min Young
I really wished they had as many romance scenes as the OTP in Queen In Hyun’s Man had, but as long as they are finally together, my heart is at rest. In my previous post about Nine I talked about the fact that Sun Woo and Min Young are linked by the fateful red string. The love from both of these two characters is so strong, no matter what happens they must end up together. Even when Min Young became Sun Woo’s niece, she remembered her past with him because of their love. I really like Lee Jin Wook and Jo Yoon Hee as pairs. They really did well with their characters especially in the sizzling romance scenes, and the personalities of the characters just seemed to fit their faces. Sun Woo is a serious, sarcastic, but loving man, while Min Young is a bubbly, outgoing, and irresistible woman. I love how in the last episode Min Young “figured” out how Sun Woo was going to ruin her—by letting her die as a virgin. Good one.

Park Jung Woo and Choi Jin Chul
If Choi Jin Chul was my father, I would cry in almost every episode too. Park Jung Woo was such a pitiful character from the very beginning to the end of this drama. All he wanted was to become a doctor and live the rest of his life loving his wife and her daughter, but it seems that was too much to ask. It’s really ironic that both him and his blood father are both murderers, and that was obviously written with a purpose. Even though both are murderers, Jung Woo-shi killed his father by an accident and never got over his guilt because that’s just the type of person he is. While Choi Jin Chul was only looking out for his life and career. I actually wanted to Choi Jin Chul to die a slow, painful death because he deserves it…I feel his death happened too quickly, but at least he’s gone as harsh as that sounds. There’s this face that Choi Jin Chul constantly made which made me want to punch him continually through my screen. How could a person’a heart be so evil. 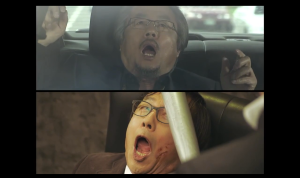 Ending Comments
I really enjoyed Nine and I hope to see it get some awards at the end of the year. It had me scratching my head many times trying to figure out the rules of the game, but it always kept me wanting more. I don’t really think the Sun Woo of 2013 came back to life to save his brother, because in the end that would mean there would be 2 Sun Woo’s frolicking around the place, and that can’t happen. Memory was a vital weapon in this drama as seen with Min Young remembering her past with Sun Woo, and even in Queen In Hyun’s Man. This would never happen in real life, but there are definitely life lessons you can take from this which is always appreciated. One of those lessons being to watch out for incense sticks and phone booths…they might ruin your life!

* Jo Yoon Hee will be in a drama coming up in July partnered with Kim Jae Won. I am sooooo ready to watch it. I think she’s really growing on me as an actress. I’m a bit biased though since we both share the same birthday. That already makes her super special to me 🙂