One of my favorite quotes from Albert Einstein is “You have to learn the rules of the game, and then you have to play better than anyone else.” The Queen’s Classroom was a drama whose name I’ve heard thrown around here and there, and one day I was bored enough to check it out. It’s not a Heartless City with suspense practically gnawing at your throat, but it’s not the fluffy Dating Agency: Cyrano either. This little drama might actually be a hidden gem for those of you who are into the school theme. What is on the surface is a teacher with the face set like a flint, and a classroom of sixth graders who seem like they are getting their first dose of puberty. But what really constitutes The Queen’s Classroom are the rules of society. Yes, the real world for you drama lover’s who are stuck on drama cloud nine like me. These kids are experiencing the survival of the fittest first handily. What makes it even more peculiar is that the entire game is run by no other than a all in black cloaked elementary school teacher who is shwred, calculative, manipulative, and ready to find one hidden gem that is willing to challenge her authority. I might have embellished some of this, but seriously, this drama might really make you look over the real world and its system.

Since the The Queen’s Classroom is a metaphor for the real world, there are 3 major groups that make up this “world”:

Teacher Ma: She is the Queen of this society. I wouldn’t go as far to say that she’s playing God, but in this case she is the supremacist. She knows pretty much everything that is going on among the kids and even with their parents. She is very wise, and we see this from the way she manipulates the parents and their children to submit to her ways. Teacher Ma creates the rules of the game, and she makes sure that she oversees everything. Not to mention, she spares no one, if you cheat, you will be punished. If you are winning, you will be rewarded, but that doesn’t mean she will let you win easily. It’s eerie to think that she managed to reproduce the real world in a classroom.

Faculty: The teachers and other important school faculty represent the prime ministers. Yes, Teacher Ma is not the principal, but she even has the teachers in her tight grasp. The teachers all have their separate responsibilities, but when they come together along with Teacher Ma, they are insignificant in comparison to her capabilities. Even when Teacher Yang (a newbie teacher who preaches democracy) refutes her overly orthodox way of teaching, Teacher Ma readily has a sharp-witted reply for her. She knows exactly what she is doing, and I love that everyone is starting to respect her for that. Well the teachers for the most part, the kids not yet.

The Classroom: This group contains the most interesting characters because they are the most diverse. You have your rich, poor, smart, dumb, cheater, snitcher, follower, leader, outcast, the normal group, and then that one person that seems to be targeted the most out of everyone. Even though these are sixth graders, they are internally knowledgeable about how the real world works…probably without them knowing themselves. They know there are powers which they cannot overrule, they know that their are hierarchies, which they actually establish among themselves. They know how to lie, to steal, and to protect. The entire classroom becomes the puppets for the puppeteer Teacher Ma. 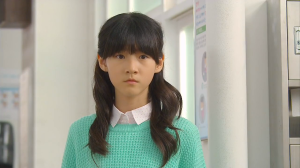 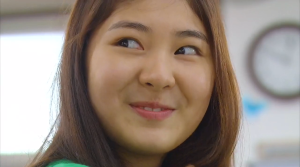 This drama can be looked at on the surface, but since the official synopsis itself and also it’s predecessor (the Japanese version) said that the teacher was trying to teach her students about the real world, we cannot overlook this fact. This drama brings to light a social issue that as human beings first and citizens next, we know exist but the majority of us fail to take action. The bystander effect plays an important role in this drama, where the students assume that another one of their classmates is going to stand up, so they keep their mouths shut. Or, the simple idea that you should always go for what you believe in. A question that ponders in my mind when watching this drama is if I was thrown into a situation similar to this, would I be like Shim Ha Na and sacrifice friends, family, and ultimately myself for what I believe in. What I love about this drama even though it kind of dramatizes the teacher’s way of enlightening her students about these life lessons, is that it’s relatable. I can actually see this happening to me if it already hasn’t or if it will in the near future. I don’t want to get too philosophical with this drama, because I have absolutely no expertise in philosophy, but it really get my wheels turning. 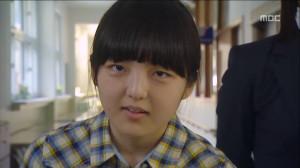 There is also a butterfly and bird (the bird cage in the official poster and the bird dance in the drama) metaphor being weaved throughout this drama. Butterflies and birds in literature are metaphorically most known for representing a character gradually nurturing into maturity until they are able to “fly” or overcome what ever obstacle they are facing. I’m still gathering more information on these metaphors, but in the meantime, they are quite straightforward.

This drama definitely gives off a Nanny McPhee vibe especially with the music, but it’s worth a try! The Queen’s Classroom is currently airing on Wednesday’s and Thursday’s.
I have a feeling we’ll be seeing this face a lot. It cracks me up.

2 thoughts on “The Queen’s Classroom: A Hidden Gem”